How Liam did on his first trip!

This past weekend we traveled half way across the country to sunny California for a whirlwind weekend and Liam's first time out of the Kansas City area.  His first plane ride.  His first hotel stay. His first time meeting his great-great-grandparents.  Our first time traveling with a baby. A lot of firsts.  Here is how it went...
Liam checks in and gets his own ticket!
After careful consideration - we flew Southwest.  We were required to show his birth certificate at the front desk (where we also checked 2 bags) and he even got his own ticket. 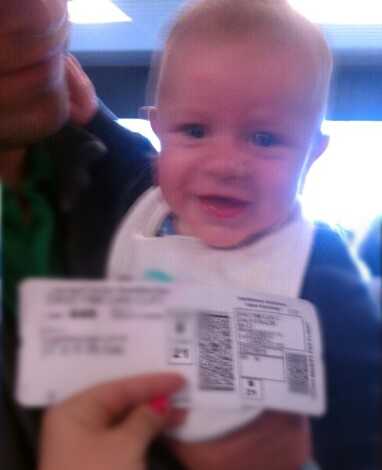 Before getting on the plane!
With Southwest, we were allowed to keep Liam's stroller and car seat (two-piece system) until right before we got on the plane. We left the stroller compacted down and the car seat with the straps pulled tight and void of toys right outside the plane door at the gate.

BUT! Before you can do that, after you get through security, you must check in with the gate attendant to get proper gate-check tags.  We saw numerous families have to get our of boarding line to go do this that hadn't gotten that memo first.


Liam on the plane, his first plane ride out to CA!
Our flight out to San Francisco, CA included a touch down at LAX.  Thankfully for our first plane ride with baby, we didn't have to get off the plane.  However, this did mean double the take offs/landings.  Clearly he couldn't eat for all of them, so we made sure he was sucking on his pacifier good! 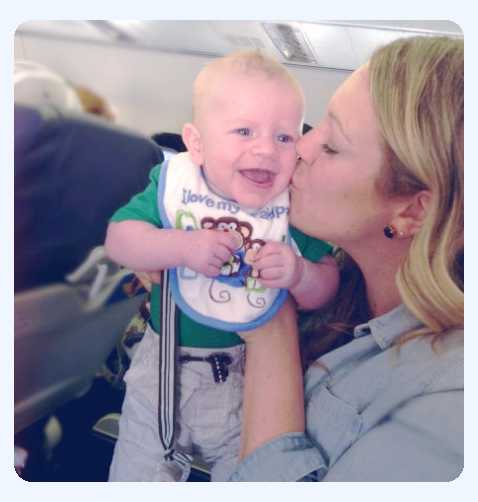 Liam did great.  He slept some, but was mostly up and playing with toys, talking to us, watching out the window or looking at all the new faces around us.


Liam in a hotel!
We stayed at a hotel that provided a baby crib/pack n' play, so we didn't have to lug ours!  Huge bonus.   Otherwise, it was business as normal - except no dishwasher meant lots of hand washing of bottles! I brought out (in our checked luggage) the bottle brush, dish soap and our own towel (I didn't want to use a hotel towel).


Liam in a rental car/out and about!
We had his car seat and stroller, so walked around with him as usual.  When we went in a car (rental car), we buckled him the old fashioned way (without the base) as directed on our car seat (the seat belt went through slots and across him).  We took the blanket with us when we were walking around for weather changes (and extra layers in the baby bag)! 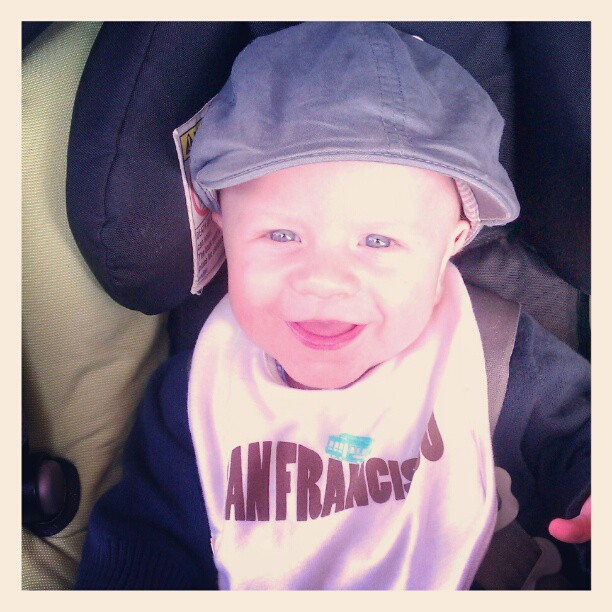 On the way home, where hiccups happened!
We were bound to cross a hurdle or two.  After a very packed weekend in California, we boarded the plane.  It was great timing, because we were taking off right in time for little man to be hungry. So he ate on the way up. Then he got sleepy and was trying to fall asleep.  He just couldn't get comfy.  We passed him back and forth - you try, now you try. Eventually, about half way to Phoenix, he lost it. He was tired and wanted to sleep.  I thought maybe his diaper is bugging him.

Have you ever changed a babies diaper on a plane?

It's terrible. Avoid at all costs (change right before you get on the plane/avoid long flights). The front lavatory has a flip down board* that takes up 2/3 of the already small bathroom.  Me, the babe and the diaper bag just barely fit and even then, it felt like a coffin.  Even worse, he was screaming in there - totally pissed.
*Bring changing pad
Once I picked him back up - he was ok, but still fussy.  We stood in the back of the plane, where the nice flight attendant turned off the lights back there and I was able to rock little man to sleep.   He slept until we landed and got off the plane. Phew.
We only received a few death stares and one so very helpful piece advice (try a bottle).
Layover in Phoenix:
This was supposed to be a 40 minute layover, so we had our stroller and car seat gate checked all the way to KC.  But we know how that goes... flight delayed due to earlier mechanical problems.  So we had new found time on our hands... 3.5 hours of time, and no stroller or car seat.

Liam was awake for a new bottle and wanted to play (was in a good mood now post nap).  So we laid out the blanket and used his toys from his car seat (you have to remove those and we carried with us in our carry on bags for entertainment) to provide a makeshift activity gym. 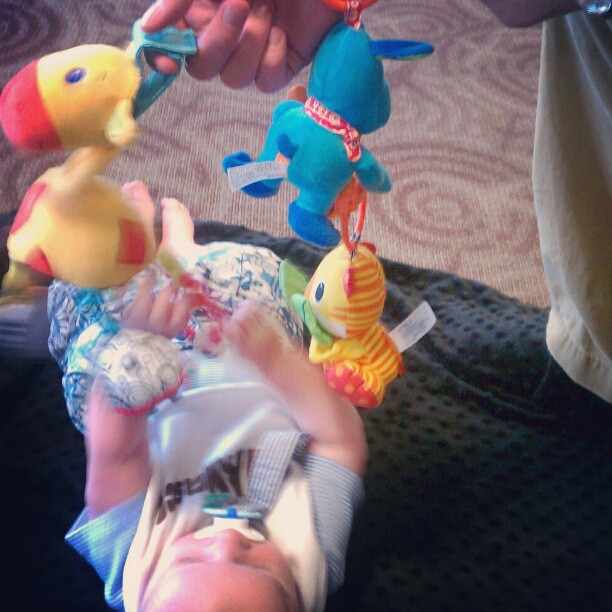 This entertainment him for awhile, before he got tired again (this time for the night). I walked around the airport with him until he fell asleep.  He slept in my arms while we boarded, through the flight, back to KC, into his car seat, on the ride home and into his crib.  He slept until I had to wake him up at 7:45am to get him ready for daycare.
Us on the other hand got home at about 3am and got little sleep before getting up for work.
Next post will be our flying with baby recommendations! Stay tuned!
Posted by Megan at 7:19 AM

Email ThisBlogThis!Share to TwitterShare to FacebookShare to Pinterest
Labels: Travel

I'd love to hear from you! Leave a comment, ask a question or let me what you think!

Hi all! I'm Meggy, the girl behind the style blog, Chasing Davies! I wanted to start a separate blog as I take a new step in my life of becoming a mom. So here will be all things baby, mama and family related, though it's a work in progress so will evolve as it goes. Please let me know if there is ever anything you'd like to see! 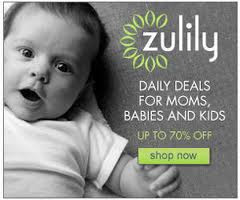 When Shopping Online... Use Ebates!